#StaySafe: Are you ‘that’ prepared? 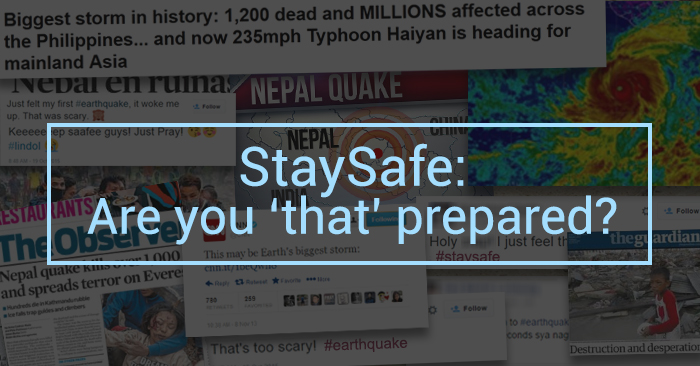 Do you remember Typhoon Haiyan — the most powerful and devastating tropical cyclone that hit the Philippines recently? How about the recent lethal Nepal earthquake? The storm of Eastern Indian of 2010? Or the one that shook the world, the deadliest in the recorded history, the 2004 Indian Ocean tsunami? Here are the accounts of some of the most noteworthy natural calamities in the past 10 years:

On a peaceful night of the 26th of December, an undersea earthquake shook up the neighboring countries of Indonesia, Sri Lanka, India, Thailand, Maldives, and Somalia. The people that time unknowingly they were facing the third-largest earthquake ever recorded on a seismograph.1 One of the deadliest, it claimed 280,000 lives in the countries affected.2 The 35-feet tsunami, clocked at 620 MPH of speed that followed, intensified the detrimental effects. With these data, the 2004 Indian Ocean earthquake and tsunami thus infamously dubbed, “One of the deadliest natural disasters in recorded history.”

At approximately 11 PM in local time, 13th of April, people in parts of Bangladesh and Eastern India braved a severe storm that lasted for about 90 minutes.3 After the havoc, there were at least 140 deaths reported, with most women and children when their huts were crushed along with 300,000 other homes and dwellings in Bangladesh and India.4 Nearly 500,000 people left homeless, devastated business or otherwise affected by the tragedy.5

Who would forget the “world under crisis” event after the Philippines laid waste by the deadliest and the strongest typhoon ever recorded? The Typhoon and the storm-surge confirmed 6,300 deaths in the country alone. The world struck with the devastation it brought to the Philippines — Red Cross estimated 20,000 in deaths with Php 89 billion in damages in business and infrastructure.6 The crisis resulted in numerous international and humanitarian response worldwide.

THE FOURTH WAVE: THE NEPAL EARTHQUAKE (2015)

Also known as the 7.3 magnitude Gorkha earthquake — it killed over 9,000 people and injured more than 23,000.7 This violent shake triggered an avalanche on Mount Everest and Langtang Valley, which caused 250 people reported missing. There were hundreds of people reported made homeless because of flattened villages. Tremendously, continuous aftershocks claimed another more than 2,500 injuries and deaths.8 The aftermath drastically affected the country’s 25% GDP.9

THE OVERVIEW IS TROUBLING

We are living in a world of uncertainty. We thought that with our advanced technology and our highly capable thinking, we already harnessed humanity on a pedestal and called ourselves, “the master.” Unsurprisingly, the recent happenings proved otherwise. We have realized that however powerful and intelligent the humans are, we will still prostrate and surrender to the power of nature.

In over a course of 40 years, 2 million died from natural disasters in Asia alone, in which earthquakes and tsunamis were the main causes. In business and economy, over US$ 1.5 trillion or over 91.8% was lost because of the series of disasters.10

“We can’t avoid disasters, what we can do is to lessen its impacts. How? By being prepared. That’s all we can do,” said by Carmen van Heese, a regional advisor for UNICEF East Asia and Pacific. We will inevitably be affected by a calamity whether we are prepared or not. The important thing to consider is whether we are prepared enough with oversight.

In the business sector, some are being complacent, which is the easiest, cost-less, and comfy thing to do — well in most cases is they are not aware. However, being aware but not doing something about it would be probably the biggest mistake you would ever do.

Yes, life is of utmost importance, but what comes next is the most second important — in business, would you retrieve your documents, receipts, permits, and invoice numbers the same as they were before? Are you “that” confident enough about your documents’ safety? Good news — a Document Management Solution can help you answer these questions. It won’t take long to learn Enadoc.

Go ask yourself, “Are you ‘that’ prepared?”