The Cloud: A Company’s Abracadabra 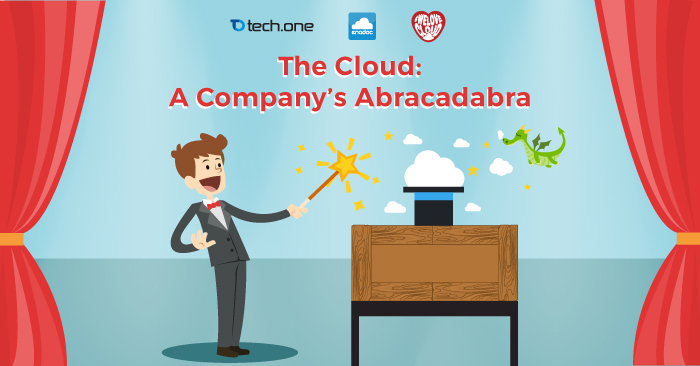 The other day I found myself watching a magician pull out a rabbit out of thin air; two snaps and boom, fluffy ears and white soft fur. Sometimes I wish I had that magic too – to pull something out of thin air or to reach some place from where I am now.

Apparently, it is possible now — to a certain extent.

That “magic” is cloud computing or “cloud” for short – putting it into techy language, the ability to access data from anywhere at any time as Steve Jobs showcased it during the 1997 iCloud reveal.

The idea of the “cloud” may sound weird at first: the film Sex Tape portrayed how the “cloud” is commonly perceived by the masses; trying to find a way to remove an adult tape from the internet, Jason Segel explains that trying to delete the file won’t work saying that “Nobody understands the cloud,” and that “it’s a mystery.”

In reality, the cloud is pretty easy to understand – it revolves around the internet and storage, like Microsoft Azure, Google Drive or Dropbox where people rent and use a “virtual” space to store files. Basically, it is using the internet to upload a file from another device to the virtual space and access that file anywhere with the same or different device – uploading and downloading.

But how is this useful for a company?

Well my friend, it totally changes the game.

But with cloud computing, all an employee has to do is to upload the file to the cloud and let the people in the other room download it from — you got it —the cloud.

That’s the gist of it, now imagine this:

Apply that “magic” on every room of the building, on every floor, on every employee that has access to the “cloud”. Now think wider and bigger, apply it on the business as a whole, connecting databases and storages for every branch in every city, in every country, and in every continent.

Even businesses with no specialized cloud computing system can still benefit from the cloud. Also, because a cloud system is supported by swarms of computers simultaneously processing the same data, your file is more secured than ever – each computer from the cloud is a back-up itself!

Even processing power can now be shared through the cloud – Azure, Microsoft’s prized cloud system, allows users to borrow processing power from its system itself, optimizing and injecting it toward APIs and applications to scale them depending on the situation. Azure even monitors your software while doing so and allows you to test before deployment.

That is insane! You can focus more on developing software than babysitting hardware by literally borrowing processing power out of thin air!

Suddenly, everyone is connected and empowered. A file floating in the cloud is now secured with a multitude of backups and copies and is now accessible at anytime and anywhere with an internet connection. Business reports, presentations, documents, business plans, video presentations, records, scans of official documents, articles, journals, additional power for processing data, photos, videos – all of these accessible from the cloud in a snap of a finger.

The internet is this generation’s greatest innovation – it’s a magician, capable of doing things no man can do.

And the “cloud” is one of its greatest magic tricks.

“What is the Cloud as fast as possible” Techquickie (Youtube Channel) – February, 2014.