A Peek at the Future: A Paperless Society 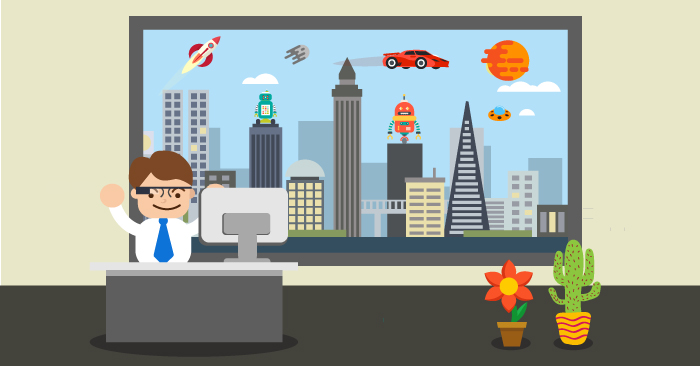 Dehydrated pizza. Flying Cars. Hoverboards. Do these ring a bell? You’re right — these were all predictions that came out from Robert Zemeckis’ movie Back to the Future II. But we have seen that these innovations are very far off of what we have today in the present. We have convinced ourselves that the people behind this movie 30 years ago had a ridiculous-way-over-the-head imagining the coming future technology… right?

We see here, the predictions quite did pan out. The technology, as we see in the movie, does all pertain to immense advancement (have we been radical enough, we could be rolling-out those hoverboards now). Instead, with a much more useful everyday gadgets, we’re now seeing smartphones that are on a much different page way back. Crazy enough? We’re not there yet. Three years ago, Microsoft uploaded a YouTube video in early 2012 of what they envision what 2020 looks like:

“Now here’s way over the head,” you say. Well here’s the thing — believe it or not, technologies like cloud storage, touchscreens, border-less gadgets, interoperability, among others do so in fact exist today.

These predictions have one thing in common: we, as imaginative humans, believe technology advancement leaps forward exponentially and by that, we ended up actually living in our seemingly far-fetched imagination. With all these larger-than-life technological advancements, we are heading towards something — we are currently gearing towards the so-called “paradigm shift.”

We are today, currently living in the paradigm of Information Age or New Media Age. According to Castells, we live in a society that is knowledge-based surrounded by high-tech economy focused on efficiency and convenience. Everything becomes faster, secure, efficient, and convenient. This revolution specifically affects how information is handled, accessed, and controlled, thus named information age.

However, the Information Age tells us the story of how we, over the years, have compressed data and information. We have started to store data in the optical drives and disks from 1986 to 1993, wherein the tremendous growth of capacity is evident. From 1993 up to now, the compression and storage capacity spiked up through systemic digitization (M. Hilbert & P. Lopez, 2011).

In 2013, the well-familiar digitization disrupted by a another new paradigm — we are now dealing with another much larger, scalable, revolutionary data storage — a Cloud storage.

Hey, It’s Not an Invisible Storage

Most of the people, when they hear “Cloud Storage,” they think that their data go nowhere, floating around the net. Well, no. In fact, it is a remote physical storage that spans multiple servers maintained and managed by a reputable hosting company, made accessible to users typically over the internet. Now you ask, “How does this affect me?” Good question. As this paradigm shift happens, accessibility, collaboration, security, and convenience come into play.

In fact, everything is going towards the cloud storage. In the finance and insurance industries, we hear the term “cashless society” where physical currencies are little-by-little phasing out (see ATM’s and bitcoins). “Isn’t paper reliable enough?” The news is, the industries today are bidding bye-bye to papers. According to a Swedish Forest Agency, the production of paper fell by 5.6% respective 2.6% in 2013 compared to 2012. In Europe alone, there is a 4% cumulative decline between 2010 and 2013. Here it is — written data are turning into digital data. To understand this clearly why this is the trend, let’s discuss in a perspective that is easily understood — let’s say, your perspective.

Let’s say you are working for a project with a team. Without connectivity, your ultimate concern is how you’ll work with others. The team should meet in a defined space where they can work together. Another case is when your files are saved in your local drives. The moment you go out your home, you’ve just lost your accessibility to your files. You are now in a position where you can’t in anyway access your files — let alone share those. Another thing is when a calamity strikes and your physical drives back in your home are beyond repair. Congratulations, you’ve lost the files and you haven’t had a backup. Multiply it in thousand folds — now you have those large industries’ concern.

The Technology is Advancing Fast

Industries in manufacturing, health, education, and finance among others are turning into the Cloud storage because of these concerns — they understand how we are technologically well advancing vis-à-vis the foreseeable risks if they don’t do anything about it.

There are other concerns about embracing the Cloud storage, which are already addressed in our other blogs. There may be fear about reliability, storage, encryption, and security (which will be discussed in the future blogs), only time will tell in the future when everything and everyone is Cloud-ready.

Are we there yet?

We definitely did enter an age where data compression and storage are not the focus anymore — but security and accessibility, which the Cloud provides. We could see a near-future where every usable information is stored in a unified system; where every office and industry is paper-free; where everyone is interconnected; and where information is accessible anytime, anywhere.

A far-flung future? I think not.